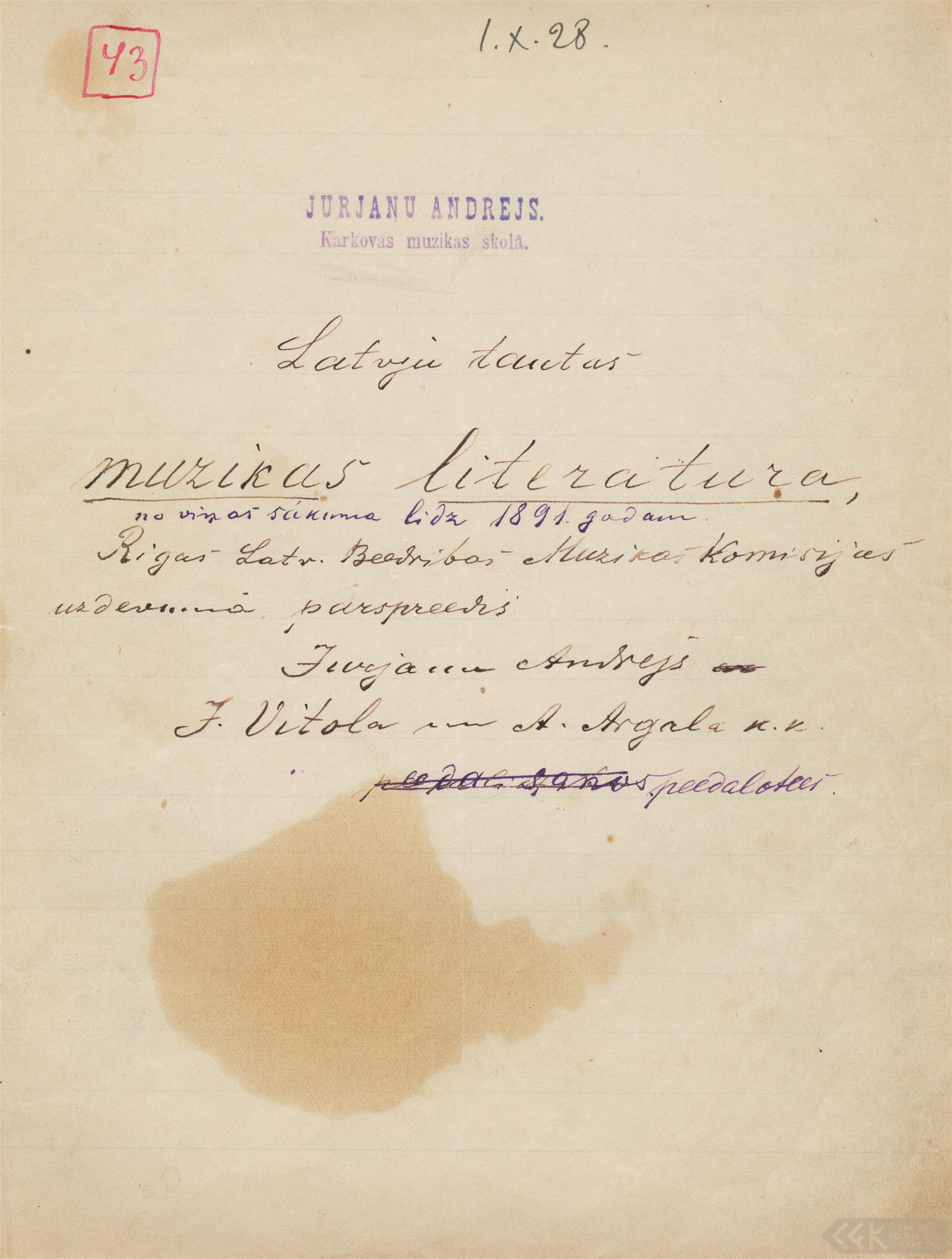 The manuscript number [1495] is the second collection of music material collected by the first outstanding collector of the Latvian folk music and composer Jurjānu Andrejs (1856 – 1922). Archives of Latvian Folklore bought it in 1936 for the considerable sum of 650 Lats from the collector’s brother Pāvuls Jurjāns. This is the manuscript of the part 2 of the Book VI of the „Latvju tautas mūzikas materiālu” (LTMM; Latvian Folk Music Materials) – „Melodies of diverse longer songs” (published by Latvju komponistu biedrība -Latvian Society of composers - in 1926, 108 pp.). (The materials collected by Jurjānu Andrejs were published in 6 books: I – 1894; II – 1903; III – 1907; IV – 1912; V – 1922 and VI – in 1926, already after the author’s death).

In 1920 Jurjānu Andrejs returned from Harkov to Latvia, already badly ill and hard of hearing, having spent there many years working. His brother Pāvuls suggested his student (at the Latvian Conservatory) Paula Līcīte (1889–1966) in the capacity of assistant and private secretary (she later became an opera singer and composer herself). Paula Līcīte helped Jurjānu Andrejs with the preparation of the book V of the LTMM for publication (the particular book contains folk dance melodies) and also worked with the book VI. Her task was to transcribe and supplement the manuscripts of Jurjānu Andrejs that even he himself referred to as „hieroglyphs”, as his ailing and weak hand produced a hardly legible result.

The manuscript features a rather lengthy contents list compiled by Paula Līcīte (35 pp.), covering the published and part of book VI as well as that only found in the manuscript. The whole collection [1495] consists of glued together paper strips, parts with incomplete numbering, with some original manuscripts, but now without any comments of collector and editor. The melodies and rather incomplete texts are registered with separate numbers, totalling at 3,490 items. For some items Vilis Bendorfs (a now retired ethnomusicologist at ALF) has indicated in pencil the full text of the songs from the first collection of Jurjānu Andrejs material [Bb 43].